The Gentlemen began as a quartet formed from existing members of The Mansfield and District Male Voice Choir. Ian Grice was asked by his daughter Heidi to select a few male voice pieces to sing at a fundraising event for her expedition to Ecuador in 2009, and so it began. They also sang that same year at Kate Curtis’ place of work, the Forest Care Centre in Ollerton for its birthday celebrations. Once people became aware of their quality performance they were invited to sing in some Mansfield Choir concerts by Musical Director Meryl Chambers.

Bass singer Kev found his football and band commitments kept him from attending practices, so he decided to stand down and was replaced by Phil Robinson, also from the bass section.

Early in 2012 the four decided they needed a little more ‘oomph’ as at some venues the volume of sound wasn’t enough and also to cover occasions when one of the group could not attend an event, so four further choir members were approached, Dave Gee (tenor 1), Terry Ashmore (baritone), John Wakeland (bass), Geoff Mansfield (tenor 2). All agreed and just waited for the ‘first call’ to get together. That ‘first call’ came when Eric decided to invite them to sing at his mum, Maria’s 90th birthday party on 20th October 2012 at the Tudor Barn, Church Warsop.

The eight only held one rehearsal, at choir accompanist Margaret Ball’s home in Mansfield Woodhouse. They blended so well with all the music they had selected and so decided no other practice was required. The singing was a success at the party with approximately six songs and a duet from Eric and Phil, and a piano piece by Georgina, Eric and Kate's neice.

A second appearance of the eight ‘Gentlemen’ came via a request to sing at the Papplewick Christmas Light Switch on. Consultation followed and they all agreed to perform, deciding that more practices were needed. Unfortunately Margaret wasn’t available to play for them due to other commitments, so Eric Bexon, a keyboard player who also sings in the tenor 1 section of the choir, was asked if he would like to join them as their new accompanist. Although admitting he was a bit rusty he agreed to join them.

After a practice session at the Forest Town Welfare and a second at St. Johns Community Centre, the nine decided that they should look towards being a self-supporting group so as not to encroach on the resources of the main choir.

They all met at The Griffins Head pub car park at around 6:15pm on Saturday 8th December, well wrapped up against the cold. After set up they had a quick warm up with the use of accompanist Eric’s dad’s keyboard. 6:45pm was the start time with a short break at 7pm for the big switch on after a count down from Ian Grice and the assembled crowd. The event went very well with much appreciation coming from the locals and patrons of the pub and restaurant.

Onwards and upwards, the ‘Gentlemen’ have unanimously agreed to arrange a proper meeting early in the New Year to plan the way forward regarding their own repertoire, dress and equipment.

Here’s to 2013 and many more!
History by former singer with The GentleMen Dave Gee (he still is a gentleman of course!)

In 2013 Geoff Mansfield, being a great organiser, began putting us on the map in terms of engagements. Although almost a year away, we were very enthusiastic about bookings for Launays Restaurant in Edwinstowe, where we expected to sing at intervals through the diners’ Christmas meal. Later in the year Ian Grice found a splendid source of twenty Christmas carols in 4 parts, and we began learning in earnest.

The end of 2014 saw The Gentlemen performing at Launays. One evening was called off due to unforeseen circumstances, but we seem to have gained a reputation for quality entertainment, and every gentleman had views on what we could do to improve further.

The GentleMen took a lunch engagement at Kelham in April 2015, we enjoyed the drink afterwards far more than the singing! Then came the 1st of May, and one of our best shows at St Philip Neri. The audience came alive as we entertained them. One valuable idea was to have a 'position' card for each item, so we knew exactly where to stand. This was the first run of 'When I'm 64'.

That is the end of our 'History' for now. There are new challenges and engagements to fulfil and time is too short!

REVIEW AND UPDATE : Busy, busy, busy! As usual our 'other lives' have stopped any additions to this history for a long, long time, it's a bit like the Dark Ages! As I type (21 10 2021) we are all emerging from the Pandemic, which for over a year reduced us to Zoom meetings and furtive rendez vous at the 'Miner' near Caernarvon Arms, to sing a few songs in the open air and 2 metres apart.
In the intervening time before Covid19 we took ourselves to London to audition for a TV show, where in our opinion we made an excellent showing. A little later we briefly added two members to the group, Phil Wright and Paul Bennett, to attend a competition in North Wales. This was fun right up to the moment we heard the result.
Launays has continued to provide Christmas bookings and a Summer meal event, where we entertained outside and were very well received.
As the gears grind into motion our real life practices are improving and I believe bookings will pick up in 2022. 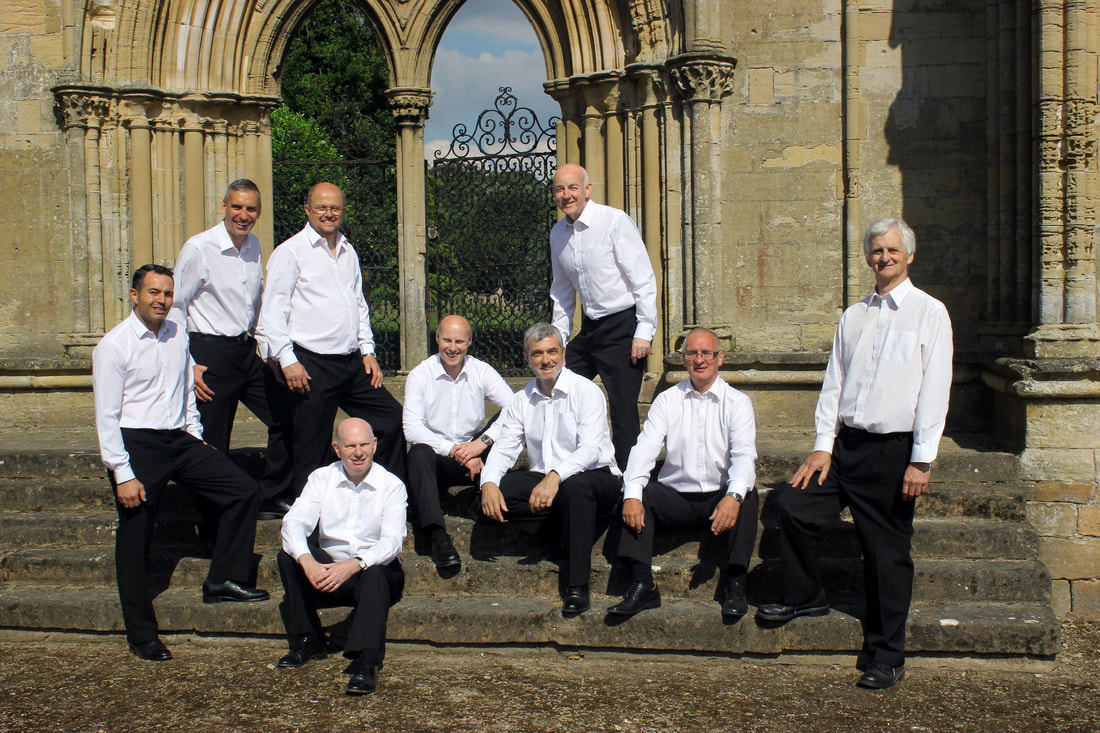